Search hotel at the best price 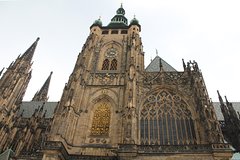 Your private guide will meet you at your Prague hotel and begin your private walking tour by leading you to the Charles Bridge. As you walk over this centuries-old Prague icon for the other side of the Vltava, you’ll be following in the footsteps of kings and queens, lords and ladies who crossed it as far back as the year 1400! As you step onto the other side of the river, you’ll be in Malá Strana. Follow your guide to several area sights, including Our Lady Under the Chain, a church founded by the Templars while they were making their way to the Holy Land; Kampa Park, where you’ll see replicas of the famous baby sculptures created by native artist David Cerný; Kampa Square, where scenes from the movie Mission: Impossible were shot; and the Franz Kafka Museum, outside of which you’ll see another interesting creation by Cerný. Next, walk to the tucked-away Vojan Gardens, not as well known as the Wallenstein Gardens, which you’ll visit next, but loved by locals. At the Wallenstein Gardens (part of Wallenstein Palace, which dates back to the early 17th century and is now home to the Czech senate), admire the rows of trimmed hedges and Baroque architecture, and then begin your walk up the hill to Prague Castle. The incline may leave you a little out of breath, but you’ll be rewarded by the views of Prague that stretch before you. Prague Castle dates back to the year 880, is considered the largest ancient castle in the world and is made up of many architectural styles, including Gothic, Baroque and Romanesque.  Then visit the Old Royal Palace, the oldest part of the castle complex, before heading to your last stop, St Vitus Cathedral. The Gothic church took nearly 600 years to complete and is home to the tombs of Bohemian kings and Holy Roman Emperors. We'll also take a break for coffee and cake in a cosy Café near the castle. The tour concludes in the castle.